Because I'm an indie game developer, social media is basically the only way I can afford to promote my games, and thus pay the rent.

Without the budget of a big studio to pay for advertising & marketing getting on Twitter, Facebook, Google Plus and a bunch of other sites and forums is the only way I have of effectively communicating to folks about the games I build.  That means "just get off the Internet" is not an option for me.

But guess what else - apart from the game playing public who might be interested in my stuff - is on the internet?
Trolls.  Folks who love to attack, based on gender, or anything they perceive as weakness, and who use tactics ranging from obscure ranting arguments to outright threats to make life on the Internet into a living hell.

Well, it turns out there is something you can do about it - block them!

But wait I hear you say, can't they just change from the last anonymous account they used to yet another new one?  Aren't I just going to be playing whack-a-mole waiting for these idiots to crop up on my feed before I block them?

This is where you need some help from the professionals!  An engineer named Randi Harper has come up with a tool called GGAutoBlocker which automates the pain of keeping up with block lists, at least so far as Twitter is concerned.

Here's how to use it. You might want to keep this page open on say the left side of your screen, while you open a new browser window on the right side. Then start by right-clicking (and choose open a new window) this link to GGAutoBlocker which will take you to step 1. 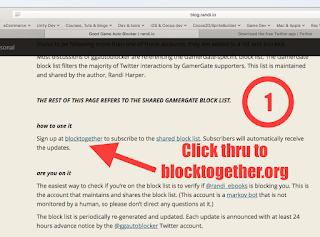 This is the GGAutoBlocker.com site (which is actually a page in Randi's blog) which has two links you need.  Right-click the first one and open in a new tab, to get to step 2. 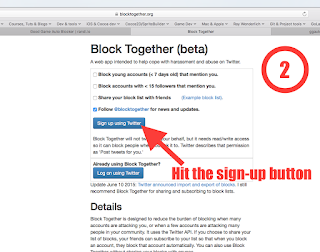 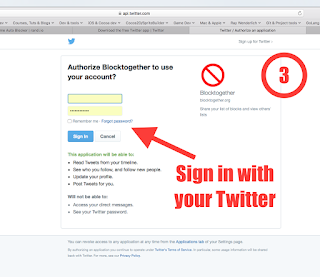 The sign-up button will take you to a page that allows BlockTogether.org's web-app to access Twitter on your behalf.  Sign in here with your Twitter credentials.  Make sure you use the Twitter credentials - username & password - that you use for the account you want to be protected by the block list. Is it safe?  Its as safe as any service these days, and if you later decide you don't want BlockTogether.org doing stuff on your behalf you can go into your settings on Twitter.com and nix the permissions. 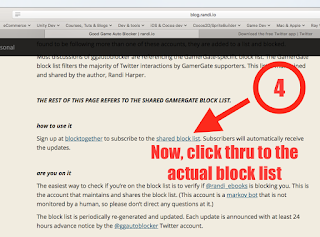 Now you are all signed up to use BlockTogether, you need to get to the specific GGAutoBlocker block list.  Go back to the tab from Step 1 with the GGAutoBlocker page, and click the link for the actual block list. You're one step away from blocking Twitter trolls! 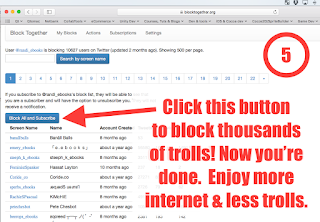 You should now have the GGAutoBlocker block list page up on BlockTogether.org listing thousands of trolls to block.  Now you can just click the blue button to block all the trolls on the list!

What if Someone is Wrongly Blocked?


What BlockTogether.org and GGAutoBlocker is doing is recording & automatically blocking all the trolls that were identified by Randi's automated scripts.  Its really the same thing you can do manually by blocking someone on Twitter.  Now there's of course a chance someone you really wanted to hear from was blocked but you can fix that in a second by just using Twitter to unblock them.  There's more advice about how that works on BlockTogether.org's website.


That's true.  You could support Randi and other's in their work on OAPI which is trying to do more to prevent online abuse. Until more tools become available there are still good privacy controls in Facebook, Google and other services that you can use to block people.  Sorry its so horrible out there.


No, you don't have to listen to people whose goal it is to hurt you.  They might have a bunch of free speech arguments, but really they don't care about anyone's freedom except their own ability to freely cause harm.  Randi has a bunch more on this topic on her "Frequently Yelled Statements" page.  I like how its called that instead of "Frequently Asked Questions".

Sarah, you're a Terrible Person for Supporting This


No, actually I'm really not.  For anyone determined to push this line I say "Just go ahead and make a comment so I can block you".  :-)

But seriously your freedom to speak does not extend to this forum which is my own blog.  Here I can block comments if I like.  If you want freedom to attack people go and do it elsewhere.

Freedom of speech does not guarantee me - or anyone else - listening.

The People behind this GGAutoBlocker are Terrible People.


That's what's called an Ad Hominem attack.  There's a lot of inflated claims, and just plain falsehoods generated by the very trolls who are blocked by this tool.  The internet troll's stock in trade is fabricating things & wildly exaggerating others to attack, defame, gaslight & discredit anyone they take aim at.  Blocking such liars is the first step to taking away their power to hurt folks.

I hope this guide helps someone and if you have any relevant comments feel free to leave them below.
Posted by Sarah Smith at 9:54 PM 1 comment: