I'm loving working with the Sprite Kit API for game development.  Using all the tools I'm effective with, that other software dev folks would know: a good code editor, nice tool chain and a well-documented API; I can really get stuff done.

In a primarily graphical environment sure you can lay things out visually, but for the thing I'm currently trying to do - layout a virtual keyboard for a game - I need to do it programmatically so I can cope with changes in screen size.

But: I found some issues with the layout code pausing big time, during the load sequence.  This was revealed by testing on a 3 year old iPad Mini that I keep around just because its great at exposing these sorts of problems.

Folks, do not EVER rely on testing your game or app in the simulator.  Use a device ALWAYS.  Once you have your project mostly done and discover you've introduced some horrible performance issue, its going to be impossible to find.

This one manifested as an ugly lag in the response after hitting the "Play" button and it needed to be fixed.  I used the Xcode tool "Instruments" and fired up the Time Profiler to drill and find the culprit.  If you've never used Time Profiler before there's a good Ray Wenderlich tutorial on it.  I also used a home grown time logging tool, the code for which I have stuck up on GitHub.  Being able to instrument my code by hand is a great complement to using the Instruments tool.  Here's some of the output from my tool:

There's a 3-4 second delay there while the SKLabel's text is set! That's crazy!

Luckily that is a one off, and subsequent calls to set the text with the same font turn out to be fast. Very interesting. More investigation with the Time Profiler: 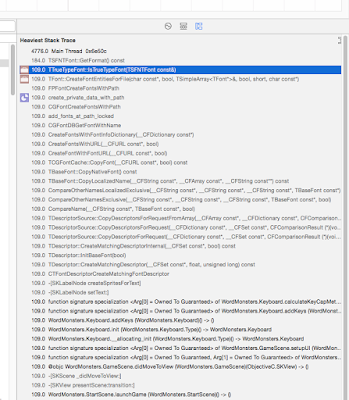 It reveals that the iOS True Type font system is having to load the font - its a custom one that I added to the project, not one that ships with iOS. Its during the first load and unpacking all the font information that the delay is incurred. I guess there might be some reading from flash of the iOS device in that as well.

Right: so that makes it a good candidate for pre-loading after the start scene has been displayed but before the player presses the start button.

With that done, time to run a new profile session:

Time to create the label text has now dropped away to nothing! Nice.

Hope that helps someone else working with SKLabelNode and custom fonts.
Posted by Sarah Smith at 4:41 PM No comments: