I am a software developer, and I have a lot of "power user" uses for my computers.  I ask a lot of them.  Over the years I have found that Mac OSX gives me the least amount of pain, and the most amount of productivity.  I use Mac OSX for all my software development work, and I quite like it.

Often I have to make my software also work on Windows, so for that, I use VMWare and run a Windows instance which is virtualized.  Its pretty nice: I can switch between Windows and my Mac with a key-press; and when I don't need Windows its harmlessly stashed away as an Virtual Machine image on my Mac's hard-drive.

This works well for me, but every time I have to summon up Windows again, I am reminded of all the Things That Tick Me Off with Windows.  Its especially bad when I either have to upgrade to a new version of Windows - which I periodically am forced to do even tho' I had just got the last version doing what I wanted.

Normally, what I do is I say philosophically to myself - "Y'know, Mac has flaws too - some folks like Windows, I will just keep my thoughts private."

But lately I have come across a lot of folks who are starting up the pointless religious wars about Mac vs Windows, and coming out with a bunch of criticisms of Mac, which amount to

Lately its getting hard to be philosophical about it because people seem to struggle with the notion that Windows is not some kind of de-facto standard for the way computers ought to be.

You used to hear people say that Microsoft Word was the "de facto" standard for documents.  Nowadays, not so much.  Those people got cured of such nonsense after Microsoft screwed them over with multiple changes to Office, then the arrival of Windows 8.

If it is not like Windows, then y'know what?  That alone is not enough of a reason to say its no good.  Maybe it is no good, but anyone want to bitch going to have to come up with a better justification for their claim.  Besides, these days Windows is not like Windows.  You have to do a bunch of things so that it is.

So I decided I would come up with my own list of things like.  I am going to be petulant, and narrow-minded, and generally stamp my little feet.

I know I ought to try fairly hard to not fall into the same behaviour I criticise in others where I mark it with a "fail" just because it fails to be what I'm familiar with.  But sometimes I think the way Mac does things is very good, and so in those cases, forgive me but I am going to get out the red pen.

So here then is my Great Big List of Things That Tick Me Off with Windows - and I will return to this post and update it with any new ones.


The Terminal is a red-headed step-child on Windows

The Windows explorer is an App

OK - enough for now.  But don't worry - I will be adding more totally unreasonable dummy-spits here in the future.

I right-click a large folder and click "Delete".  Does it get deleted?
No, it tries to "Move it to the Trash".
Then it tells me after 40 minutes of trying, that its "Too big - go ahead and Delete?"
Sure - that's what I asked for in the first place.
Now it displays this nonsensical dialog where it reports how "fast" it is going with its delete process.
Gaaaah!!!!  WTF!!!!! 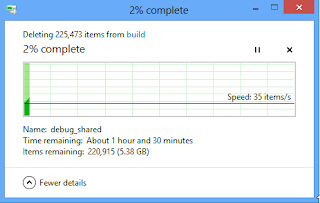 I have heard a lot of people complain that with the Windows File Explorer you can right click and cut, then paste into another location.  I can do this fine on Mac, just by having two Finder windows open.  Try it - works perfectly: drag and drop.

What else works fine on Mac is deleting, and moving - on Windows we have to apparently make a song and dance about it, with progress bars and dialogs going off everywhere.

To be fair, deleting on the Mac will send stuff to the Trash, instead of actually deleting it.  But on the Mac I have the Terminal and "rm -Rf ~/Documents/crap_i_dont_want".

And everything to do with large folders is so incredibly slow and painful, even allowing for the virtualization it takes orders of magnitude longer to do file operations on Windows.